The cashew nut is increasing in popularity as research continues to show the health benefits for consuming them – as long as they are not salted or honey roasted! Raw cashews will not only improve the taste of your curries or stir-fries, but will add extra protein and rich nutrients, which are good for your heart, eyes and skin. Compared with other nuts, cashews, like almonds, have low calories per nut. However, before you rush out to stock up, bear in mind cashews are still relatively high in calories compared with other food and you will only need a few. The recent increase in prices, which are up 23% since the start of the year, may also put you off. 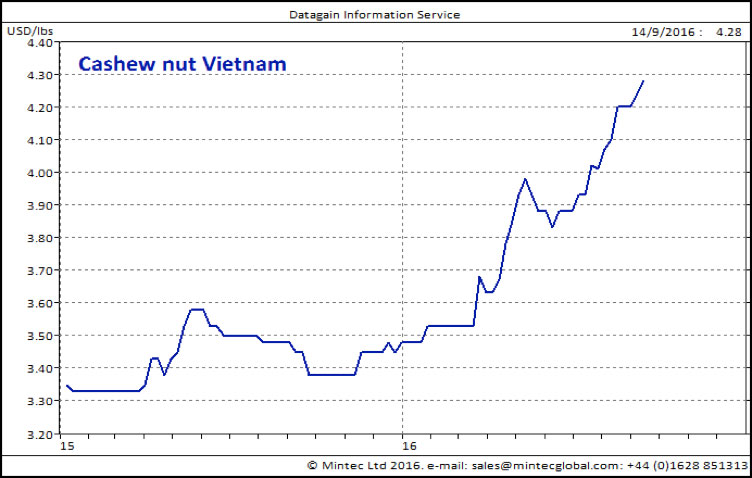 The market is currently experiencing the highest price in nearly five years, due to low supply from the major growing regions, particularly Vietnam and West Africa. The combination of severe droughts and heavy rains in these areas saw a reduction in both crop yields and quality earlier in the year.

Vietnam is the largest producer of cashew nuts — responsible for 28% of world production. However, Vietnam also imports shelled cashews, which are processed at large plants in the country and re-exported. Consequently Vietnam accounts for 42% of the world’s processed cashew nut exports. Many of the cashew nuts imported by Vietnam originate from West Africa, which is still experiencing severe droughts that could also affect next year’s crop.

Demand has also increased from buyers looking to Vietnam, due to the high quality of their processing. Despite the high prices, exports from the country are currently up 5% at 228,000 tonnes since the start of 2016 when compared to the same period in 2015. Concerns over the quality of the upcoming crops also means buyers are rushing to secure current supplies.

With cashew prices reaching such a high, you may be better placed looking at the alternative healthier nut: the almond. Previously high almond prices saw the popularity of the cashew nut increase. For nearly two and half years, almonds traded at a premium to the cashew; however, prices are now lower. Almond production in California for 2015/16 is estimated to have reached 1.9 billion pounds, due to severe droughts. Weather conditions for the 2016/17 season, however, have been more favorable. In addition, an increase in planting area is expected to see the production rise to 2.1 billion pounds.

If you’d like to learn more about recent price movements across the nut market, you can do so in our October Commodity Report, released on the Mintec e-store at the end of October.

In Andhra Pradesh, Palasa variety of Srika kulam and Vetapalem variety of Prakasam district cashews are famous for their rich taste.
Visakhapatnam: Over the years Andhra Pradesh and the neighbouring states have developed a taste for African cashew nuts giving a tough competition to local cashew varieties.

The import of cashew from African countries has been steadily going up. From here, after processing and adding value, the African cashew is also going to countries like US and some others in Europe and South East Asia.In Andhra Pradesh, Palasa variety of Srika kulam and Vetapalem variety of Prakasam district cashews are famous for their rich taste.

Imports of African cashew nuts which started in 2007-08 at Vizag port was initially only 10,000 tonnes. This has gradually increased and in 2015-16, the imports at Vizag container terminal stood at close to 1 lakh tonne at Vizag port with around 5054 TEUs (20-feet equivalent units or containers). This year already 2,000 containers of 20 tonne each had already been imported. AP occupied sixth rank in terms of number of units and third rank in the processing of cashew nuts in India. Cashew nuts from 36 African countries are being imported.

“Since two years, the cashew nut production in Andhra Pradesh has come down to just 25 per cent of the total cashew crop. Besides domestic consumption, we used to export the processed nuts to other countries. Now, we are importing the cashew nuts from African countries, processing them and exporting the cashew kernels to other countries and also to domestic market,” Palasa Cashew Manufacturers Association president Malla Srinivas Rao told this correspondent.

Andhra Pradesh has about 46,913 hectares of area under cashew cultivation with an annual production of 12,500 ton-nes of raw nuts. Srika-kulam, Visakhapatnam, East Godavari, West Godavari, Krishna, Guntur, Prakasam and Nell-ore are important cashew growing districts in the state.